“I want to try the impossible to show it can be done”
These are just some of the inspiring words spoken by the incredible Terry Fox as he embarked on his mission to run across Canada, all the while wearing a prosthetic leg. 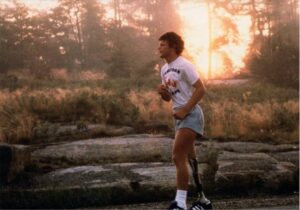 Terry Fox was a young, athletic and tenacious student from Winnipeg in Canada when at the age of only 21, he was diagnosed with a malignant tumour in his right knee. Unfortunately his leg was required to be amputated above the knee as the only life-saving procedure available at the time (1977).

However, his tenacity and love of sport were never lost. Less than two years after his amputation, Terry began training for his Marathon of Hope – a run from the east coast to the west coast of Canada in an effort to raise money for cancer research and awareness. Despite the lack of availability of componentry used in modern running prostheses, Terry was inspired to take on such a challenge when reading about another running amputee the night before undergoing an amputation himself. Indeed his drive came not only from his dreams to be as active as possible and to challenge the common perception of limitations imposed on amputees, but also to do everything he could to reduce the impact of cancer that so many others had experienced:

“It’s one thing to run across Canada, but now, people are really going to know what cancer is.”

“I’m not a dreamer, and I’m not saying this will initiate any kind of definitive answer or cure to cancer, but I believe in miracles. I have to.”

On the 12th of April, 1980, at the age of 22, he dipped his prosthetic leg into the Atlantic Ocean before embarking on his quest. Through brutal summer heat, ice storms and strong winds, he ran nearly 42km per day – that’s a marathon every day with a prosthetic leg – for 143 days, covering 5373km. Amazing is an understatement.

Over this time, waves of public support grew and grew as did the funds raised for cancer research and awareness. Despite pain, exhaustion and wear and tear on his prosthetic leg, he continued day by day, continually being encouraged by this overwhelming support.

On the 1st of September, 1980, the pain became too much. Doctors had confirmed that his primary cancer had returned and had spread to his lungs. He could no longer continue on his odyssey to run across Canada, yet the public support did not wane. Donations continued to stream into for the Marathon of Hope, totalling $24.17 million by February, 1981 – Terry’s dream to raise $1 for every Canadian is realised.

However, the world was not about to forget Terry Fox. The first Terry Fox Run was held in his memory only 3 months after his passing, with 300 000 people taking part at multiple sites around the world and a further $3.5 million being raised. These runs are now held annually at sites spanning multiple countries with all proceeds going towards the Terry Fox Foundation, which continues to contribute to cancer research, including through the Terry Fox Research Institute. To date $715 million has been raised.

Needless to say, the world listened to Terry when he said:

“Even if I don’t finish, we need others to continue, it’s got to keep going without me.”

In addition to his contribution to cancer research and awareness, Terry’s run has also inspired the development of more advanced prosthetic design. While on his run, he met with prosthetist Guy Martel to discuss the issues he experienced whilst running. Martel then went on to lead a team in the development of the Terry Fox Running Prosthesis which included an improved polycentric knee mechanism as well as a spring-loaded and pneumatic shock absorber. Although Terry was never able to trial this design before he passed away, it undoubtedly has contributed toward the development of modern designs of prosthetic componentry for both every day and recreational use.

And remember,
“Anything’s possible if you try”.